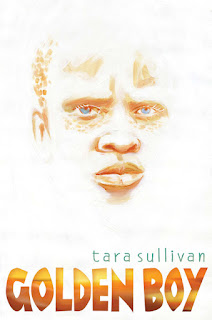 I've been a fan of it ever since I joined Tara's writing group in 2010. Back then, GOLDEN BOY was just a partial first draft, and my first contribution to the project was messing with one of Tara's beautiful metaphors by pointing out that howler monkeys don't live in Africa. Sorry, Tara.

The project's obviously come a long way since then. In honor of Tara's exciting debut, I was going to do some science-y tie-in about one of the book's plot elements, such as albinism, poaching, or genetics. But as I sat down to start my blog post, I found I couldn't do it. It just felt too kitschy. And GOLDEN BOY deserved better.

Here's what readers of this blog really need to know about this debut novel:

GOLDEN BOY is a beautifully written tale of self worth and true bravery. GOLDEN BOY doesn't shy away from the horrors of its real-life inspiration (namely, albino-hunting in Tanzania), but never does it feel too gruesome to read (the violence is kept below the PG-13 level). GOLDEN BOY takes what could have been a lecture on human rights, and instead does what every human rights story should do--it makes its hero a person, instead of a symbol.

And that's really what GOLDEN BOY is all about. Finding the person beneath the stigma. Habo is a real person. At least he is to me, and he will be to you, if you give this book a chance.

I had the honor of getting to know Habo as he grew. It all started in Porter Square Books in September, 2010. From there, I spent months, then years, working with Tara and Habo alike, participating in and cheering on the development of this amazing book (which is already getting starred reviews). Tomorrow night, I'll be back in Porter Square Books, wearing my GOLDEN BOY t-shirt and celebrating with Tara at her launch party. It comes full circle, and I can't stop smiling about that.

If you're in the Boston area, the party starts at 7pm. If you can't make it, do yourself a favor and pick up a copy of GOLDEN BOY anyway. Trust me, you want to read this book.

I'm so excited for this debut, and so incredibly proud of Tara and her journey to publication. This is just the beginning for this impressively talented young author, and I look forward to many more Tara Sullivan launch parties down the road.

Posted by Katie Slivensky at 8:55 PM No comments: