It was hard to narrow down to three this week. Tried for a good mix: we've got space rocks, climate science, and talking dolphins. Onwards!

A group of mysterious objects lies between Jupiter and Neptune, hanging out in orbit amidst the gas giants. It's never been clear if these things were asteroids that had made their way farther out in the solar system, or comets heading on in. Because of this identity confusion, they got their nickname: Centaurs.

But a new study has cleared things up. NASA's Wide-field Infrared Survey Explorer (WISE) has made observations on infrared images which indicate, because of their darker coloring, that these mystery objects have a cometary origin. This means these objects likely came from the edges of our solar system, and were once active comets. They might even become active again in the future.

One space mystery solved! ...ish. It's still unclear exactly how those objects got there, but at least we've figured out which direction they came from!

The inland regions of Greenland's glaciers are flowing 1.5 times faster than they were just a decade ago, which has puzzled scientists. They knew the edges of the glaciers were flowing faster because they were melting from climate change, but the middle should've been relatively unaffected.

But a new model demonstrates how this very scenario could occur: you just need to consider the glaciers as if they're big chunks of butter that you're softening for cooking. The melting exterior drains warm water into the interior, which then softens until it bends and flows, even though it's not yet pure liquid and "drippy".

So... great that we understand why Greenland is melting so much faster than predicted. Now to find a way to slow that down.


3. Dolphins Have Names (and not just ones we give them!)

As has already been observed in captivity, though never proven, a new study demonstrates that bottlenose dolphins respond to unique, "signature whistles" that dolphins develop and broadcast to others. Each dolphin has its own. And now, it's shown that they respond to those signature whistles as a person would respond to someone calling their name.

When scientists played a particular dolphin's signature whistle, that dolphin's attention would be captured, and it would call back, repeating the whistle. It is clearly an identifying marker of each individual dolphin. Therefore, for the first time in biological history, it's been proven that other animals name themselves.

I wonder what they call us.
Posted by Katie Slivensky at 9:23 AM 2 comments:

This is a question I get asked a lot. The public seems enamored with this notion that T. rex didn't actually hunt. It's bizarre. They're all so very disappointed by the idea, and yet obsessed with it, almost as if they're actively looking for a reason to pout about scientists making T. rex ultra lame. "Gee, way to go and let us down again, science. Party poopers. Pluto killers."

Allow me to clear some things up. The hunter/scavenger debate is not a major point of controversy in paleontology. Not by a long shot. It was just a suggestion brought up by Jack Horner back in the early 90s, and no one in the paleontological community has flipped out over it (and if no one's flipped out over it, then it's not a big deal, because paleontologists enjoy flipping out over things).

The answer to the question of if T. rex hunted or scavenged is basically...they did both. Just like any modern carnivore.

There's been some hubbub recently about a cool fossil find where a hadrosaur vertebrae has a T. rex tooth embedded and healed over, which implies the T. rex bit this dinosaur when it was still alive and had time to heal. Therefore, likely evidence of predatory behavior on the part of the T. rex. It's being touted as the "nail in the coffin" on the scavenging theory, which just kind of makes me roll my eyes. This is a neat find, to be sure, but doesn't do much other than to affirm what other evidence has already implied: T. rex could both hunt and scavenge.

Many modern carnivores hunt while also supplementing their diet to varying degrees with scavenged meat. That's really how most predators go about their lives. Does it make them less fearsome? Not really. They can still kill things.

So as far as my reaction to this particular piece of pop culture dinosaur news, I'm nodding along with basic interest, but not flabbergasted (as many people have expected me to be). Sorry if I've burst anyone's bubble. I wasn't even going to cover this story on my blog, but I've had enough people ask me about it that I felt like I probably should address the issue, and address why I wasn't more super-psyched about it.

Remember, just because a predator is eating something already dead doesn't mean it couldn't kill you.

Posted by Katie Slivensky at 5:00 PM No comments:

The return of the roundup! There were just some cool things happening this week that I couldn't ignore. Here we go! 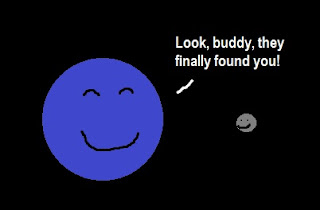 By studying some pictures that Hubble took in an effort to learn more about Neptune's rings, astronomer Mark Schowalter was surprised to discover an "extra dot" after letting the images process one day.

This moon is yet unnamed, but is the first discovered for Neptune in a decade, and brings Neptune's moon count up to fourteen.

It's a small moon--maybe only ten or twelve miles in diameter--but hey, considering that it orbits the farthest planet out in our solar system (averaging over 2.7 billion miles away from Earth), I'm still just impressed that we can even detect such things!


2. Long-Necked Dinosaurs Went Through a LOT of Teeth


Sauropods (aka long-necked dinosaurs) had tooth replacement, like sharks and many other modern animals have. However, it's now known that some of them blew through their teeth ridiculously quickly: in as little as 30-60 days, they would develop, use, and replace each tooth.

The suggested reason for this is that in order to get enough food, sauropods (who didn't chew), had to snip such an enormous amount of leaves and branches every day with their peg-like teeth, that those teeth just wore out almost the moment they'd finished erupting in their mouth.

Not every species of sauropod had the same rate of tooth replacement, though. Some were faster, some were slower, and this indicates they were utilizing different plants for their diets. This helps to explain how many species of long-necked dinosaurs could share the same habitats and not be in direct competition.

You know, I was always a postcranial gal in my paleontological studies, but what scientists are able to learn using teeth nowadays is admittedly, pretty dang awesome.

Antibiotics only help against bacterial infections, but when you have a fever, how can you tell if its from bacteria or from a virus?

Now, a new test may help. The activity of your genes change as you're fighting off disease, and with certain genes, they change differently if your illness is caused by a virus or bacteria. Researchers have identified 18 specific genes that help tell these causes apart.

If this method becomes popularized, it could significantly slow down the evolution of antibacterial resistance in bacteria, since often that develops because of over-prescribed antibiotics. If doctors can determine with a quick and simple test that your fever is from a virus, and not bacteria, they won't give you unnecessary antibiotics. This is definitely a "thinking outside the box" sort of plan, and I hope we see more things like this in medicine in the future!

Posted by Katie Slivensky at 12:54 PM No comments: