NaNoWriMo: The Best Thing Ever

In a slight deviation from my usual posts, I'm going to discuss something dear to my heart: NaNoWriMo.

For those who somehow have never heard this term before, NaNoWriMo stands for "National Novel Writing Month". The challenge: in one month (specifically, November), write 50,000 words of a new, original novel.

Now, the rules are often bent, and that's just fine. I think officially it's morphed a bit through the years and isn't as strict as it once was. But as a stickler for rules, I always followed them to the letter. I would plan, outline, and character sketch, but I wouldn't begin penning a word of my new story until November 1st hit.

Why am I making this decision? The answer is simple: I don't feel like NaNoWriMo can help me any more than it already has. As an aspiring author, I started NaNo in 2009, hoping to get a full story down on the page so I could begin to seriously pursue my dream. I did that. It was such a successful and fulfilling way to write a novel, that I wrote a sequel to my NaNo novel in 60 days in Spring 2010. And I wrote the third in the series during NaNoWriMo 2010.

And then I paused. I had a lot of material. I had joined a writing group, and was getting into the nitty-gritty of revisions. I didn't really need more material.

So during 2011, I stopped writing and instead revised the heck out of my first NaNo novel. But the siren call of NaNoWriMo caught me by surprise that November, and I found myself writing a brand new story even though I had no real reason to do so. This time, it was completely unrelated to the trilogy of stories I'd already typed up. It was new, and fun, and different.

In fact, the "newness" of the story got me so excited, that I started another new story in Winter 2012... which I then abandoned in Spring 2012 when I found my real new story (aka, the one I've now polished to awesomeness and am currently agent-hunting with). And even though I had found my Awesome Story earlier in 2012, I still couldn't resist NaNo and the allure of writing yet another new story. So in November 2012, I wrote sixth novel.

But it needs to stop. Six novels in four years is fabulous. But I don't need to turn that into seven by November 30th, 2013.

I'm working towards traditional publication, and NaNoWriMo is no longer useful in the way it once was. Back when I started, NaNoWriMo was exactly what I needed. A way to prove I could write an entire novel. A way to get over my finickiness and just get words down. A way to blow through a story from start to finish, and train my mind to think as a plotter in a pantser world.

But now I know what I can do, and I've discovered that I can get just as much done when I establish my own personal deadlines as I do during November. So this year, I'm not doing NaNoWriMo. It won't give me what I need anymore. Right now, I need to shop my Awesome Story to agents. I also need to revise a NaNo from 2012. And I need to draft a particular novel that I've been promising my critique group I'd write for over a year now.

On that note, that's something else NaNo has taught me: not every book is right to draft in thirty days. Some work great. Others do not. The particular novel that I want to do next needs to be crafted into first draft-dom, and not vomited out like my others. It will be a new challenge, and it won't be possible to do in thirty days. 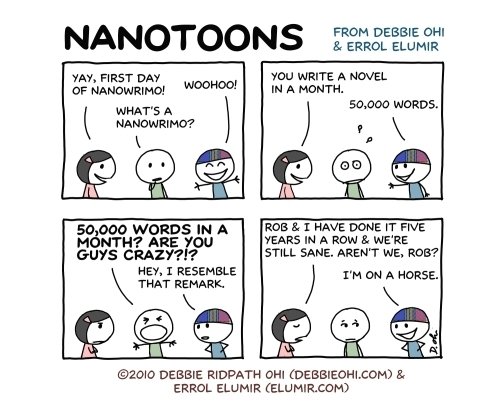 So, to sum up, NaNoWriMo is awesome and I encourage all aspiring writers to do it at least once. But as for me, I think I've reached the natural conclusion of my personal NaNo character-arc.

Some closing advice for anyone doing NaNo:

1. You can do it, even if you're doing other things with your life...to an extent. I worked full time each year I won. That said...

2. You will need to shut out most socialization. You need your evenings and weekends. You need those days off. Trust me. Just clear your calendar now.

3. Write during weird hours. Wake up earlier than normal. Or stay up later than normal. Get yourself something caffeinated, sit down at an odd time, and write. Because of the oddness, you won't immediately get yourself distracted with habitual Facebook checking, etc.

4. Prepare as much as you can beforehand, but don't be afraid to abandon your outline halfway through the month if you find your story going down a different road. Your characters will tell you where to go.

5. Do word sprints. If you're on Twitter, you can connect with others doing these. Or on the NaNo forums. 15 minutes can turn into 1000 words if you're racing someone else.

6. Don't worry if things aren't making sense. They won't. Your draft is going to S.U.C.K. and be riddled with plot holes. And that's fine, because no one will read that draft. You can revise it before showing anyone, if you ever chose to show people it at all.

7. When that unplanned character shows up at 25K? Let him in!

8. The first 10K are fun. The second 10K are difficult. The third 10K drag painfully, but keep pushing. The fourth 10K is where you'll start to feel like a writing robot. The fifth 10K...that's where it gets exhilarating.

9. Join the official NaNo site and enter your word count each day. It's so much fun to watch that little personal word graph climb! It's one of the only sources of satisfaction you will get for 30 days. Take it.

10. Never look back. If you stop to edit or revise, you lose precious time. Don't look back, don't delete. Just keep going. Revisions are what the other 11 months of the year are for. 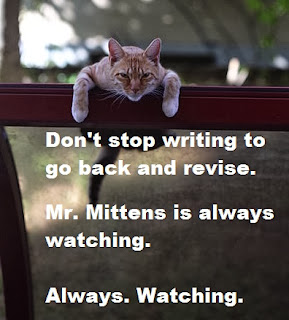 Best of luck to anyone embarking on this adventure! And thank you, NaNoWriMo, for giving me the confidence to chase my dream.
Posted by Katie Slivensky at 8:48 AM