A story that connects us all.

This. This is awesome:

I love all the BBC nature documentaries, and it's great to see them putting their footage together for a feature film. Apparently this came out last year in the UK, and while it is basically just recycling footage from earlier documentaries, I'd love to see it here in the US. What a moving tale.

Everything on Earth goes through a journey. Everything has a story to tell. And our stories are remarkably similar.

The things that bind us together on this planet are the same things that resonate in our hearts as fantastic story elements. That's good to keep in mind as an author. Plus, it can help with your story's moral compass.

If more people took the time to notice the world around them and the similarities we share with the tiniest ant, maybe we'd have more compassion for life beyond ourselves. Maybe Earth wouldn't be in so much trouble. Maybe we could tip the scales, and begin saving more creatures than we destroy. They are us, in a way, after all. We just need to see that.

It's not hard to make these connections between living things. And these connections make for a great story. If any author is looking for inspiration, do yourself a favor: sit down for a few moments somewhere out in nature. If that still doesn't do it, pop in a wildlife documentary. It's sure get your creative juices flowing.

Not sure which documentary to pick? For starters, you can't go wrong with any of the BBC ones. Planet Earth, Life, Blue Planet, Life of Birds, Life of Mammals, Life in the Undergrowth, Life in Cold Blood...the list goes on. David Attenborough is awesome at outlining some of the greatest stories on Earth.
Posted by Katie Slivensky at 8:56 AM No comments:

Email ThisBlogThis!Share to TwitterShare to FacebookShare to Pinterest
Labels: Inspiration

Think science is a cold, unfeeling subject, too dry to include in story writing? Or maybe it's just there to be used in stories as a plot device, à la disaster films? Think again.

Science opens up a whole new understanding of the universe around us, and our place in it. The knowledge it brings can awaken some of our deepest emotions. Science can be, and is, incredibly beautiful.

Today, I gave a planetarium presentation for sixth graders and blew their minds (nothing unusual there, it's a common occurrence in my line of totally awesome work).

One girl in particular just couldn't stop asking questions. It was great, especially since when the presentation began, the sixth graders were all completely silent, with no questions for me whatsoever. Who wants to look lame in front of their fellow middle schoolers, after all?

After about thirty minutes of teaching, the atmosphere had completely changed (as it always does). The sixth graders couldn't get enough of astronomy. They wanted to know more and more and more. Especially the one girl I mentioned.

"So wait. What's out there after the end of space?"

"No. Nothing. Nothing is just that: nothing. It's hard for our minds to comprehend."

"So that's it, then? We get to the edge of the universe, and we can't go any further?"

"Not exactly. The universe is expanding, so we'll never really be able to get to the edge. Perhaps we could get close, but the next moment - bam - it will be bigger."

"But after the universe, there is nothing."

"For our universe, yes, that's how it works."

"There may be more than one universe. We might be part of a multiverse. One universe, amongst many. And each with their own rules."

"So...what would be in those universes? Other humans? Could we be in another universe right now, just...different?"

...the questions just kept coming. And who could blame her? It's fascinating to think about. And all provided by science.

She's not alone, either. Every kid has these questions, and more.

The point of this post, is to demonstrate that science is a story. It's the story, in many ways. And I've yet to meet a kid who doesn't want to hear it. Or, as they get older, a kid who doesn't want to hear it after I first get them to sit down and listen for a few minutes. The older the kid gets, the bigger the hurdle to jump to convince them that science isn't "lame" (something I will address in future posts).

However, no matter their age, when my teaching time is up for the day, every kid begs for more. They want to hear the whole story. Science has struck a chord deep inside them, and they want to learn everything they can about it.

But that's the wonderful thing about science. The story is never complete. There is always more to learn.

My challenge to all authors is to take advantage of the naturally awe-inspiring stories science provides, and incorporate them into your work. It won't make your story dull, or make it feel like school, or make it too technical or clinical sounding. It will make it awesome.

Now go watch that Neil DeGrasse Tyson video from earlier in the post, if you haven't done so yet. Maybe you'll see what I mean.
Posted by Katie Slivensky at 5:57 PM No comments:

Perhaps you're wondering to yourself: why should I trust any of the things this random internet person says? Where is the proof that this person actually knows what he or she is talking about?

But seriously, who am I to teach you anything about science?

Answer: In addition to being a science educator, I actually am a scientist.

Am I one of those fancy-shmancy PhD-having scientists? Well, no.

I was in the process of getting a PhD a while ago, and decided that I missed teaching kids far too much to be a research professor for the rest of my life. So I left my program and ran off to work with the public. Probably the best decision I ever made. (To be clear: I have nothing against PhD's or PhD programs - they're awesome. It just wasn't for me.)

Anyway, here's my background, for anyone curious:

Phew! That just about covers it, I think. Hopefully now you'll be comfortable with me rambling science factoids at you in future (more interesting) posts. Also, congratulations if you read all the way through all of that.

Posted by Katie Slivensky at 4:10 PM No comments:

And I have the best job on the planet for channeling that enthusiasm: I am a science educator. Think "Bill Nye" and you've got the right idea. My specialty is paleontology, but I also teach biology, geology, meteorology, zoology, archaeology ... and many other -ologies (except astrology, which doesn't exactly count as science). (Though I do teach astronomy. Just in case you were wondering.)

I am also an author. I write middle grade novels touching on the themes of all the above. My goal in life is to inspire kids to get outside and explore their world. I am not published yet, but I am working on it. I am a member of SCBWI, and have been trying my best to do this author thing the "right" way. That means patience, multiple revisions, critique groups...the whole nine yards.

This blog will hopefully provide a place for fans of science to hear some interesting stories, and fans of stories to learn some interesting science. I would love more than anything to see accurate science show up in fictional (and let's face it, nonfictional) kidlit. Science is pretty much the coolest thing ever, and it's so often underrepresented/misrepresented in media! It doesn't have to be that way! With any luck, this blog will prove just how awesome science can be, and make it both exciting and accessible to people of all ages and backgrounds.

Let's try an example. Did you know Europa, one of the four Galilean Moons of Jupiter, is actually an ice world with gigantic oceans under its frozen surface? It could be hosting alien life, right in our own Solar System! Life far more developed than anything we chance finding on Mars! 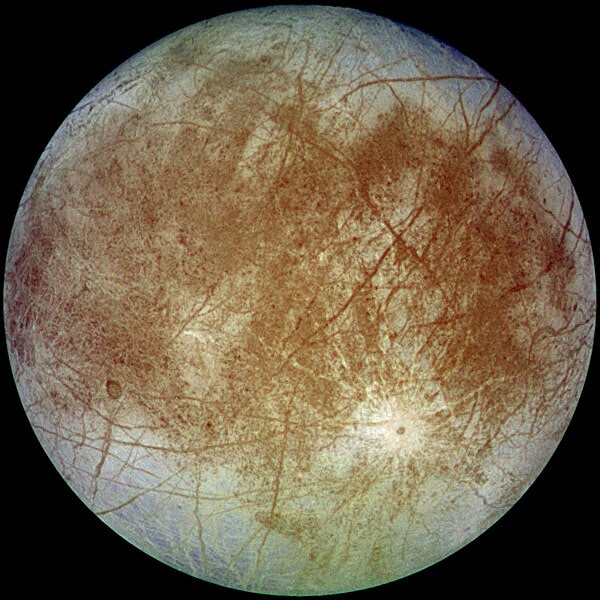 How cool is that? And what a neat concept for a novel!

...Speaking of, if you are an author trying to incorporate science into your book, please don't hesitate to drop me an email with any questions. If I can't answer your question, chances are I know someone who can. Seriously. Go for it. My contact info is over in the sidebar.

With all that being said, welcome! I hope you're ready to join me in discovering all the stories in the great, wide, wonderfully wild world that is SCIENCE.


Posted by Katie Slivensky at 7:41 PM No comments: