Kicking off the new year right, by being behind on all my Weekly Science Roundups! When will I learn? Now I have to go through all the unpublished posts and try to pick the four most exciting stories I wanted to talk about. Which, you should know by now, probably means prehistoric animals and SPACE.

Anywho. Onwards to the third Monthly Science Roundup, with my top four science stories of January:


Can we ever know the color of extinct creatures? The answer has rapidly been trending towards yes.

In the past few years, fossil melanosomes (an organelle in animal cells that's responsible for much of the pigmentation that gives animals color) have been discovered and analyzed time and time again. For instance, we now know with a decent amount of confidence that some ancient feathered dinosaurs had brown, black, red, and white on their feathers. Which...is pretty amazing.

If you aren't comprehending the hugeness of this, try to remember that these creatures haven't been seen on Earth for tens of millions of years.

And we know what COLOR they were.

And now we know the color of a handful of sea reptiles, as well. This is one of the first major instances of determining colorization of skin rather than feathers, and it's a super big deal.

An 85 million year-old mosasaur and a 55 million year-old leatherback sea turtle have both been shown to have the typical ocean-coloring pattern: dark on top, light on bottom. This is known as countershading, and assists them in blending in (dark when seen from above, like looking down into the ocean, and light when looking up, as if looking towards the sunny surface).

Additionally, a 193 million year-old ichthyosaur has been shown to be solid black, much like the modern day sperm whale. The sperm whale is uniformly dark because it dives to the depths of the ocean to hunt, which gives us a clue about the hunting style this ichthyosaur had.

Again, let that sink in: fossilized skin patches have microscopically informed up as to the color of things that are long-since dead, and what we've learned from the color has now taught us things about the behavior of animals that could never EVER be observed alive by human beings.


The largest asteroid in our solar system--and a dwarf planet in its own right--might have water erupting out of it.

The Herschel Space Observatory has found that water vapor is escaping Ceres in two locations, likely bursting out of volcano-like geysers. Huge ones.

This is the first serious evidence of water in the asteroid belt, though scientists have guessed there might be some there for decades.

A slightly less fun model of where this water comes from is that it is sublimating from ice on the surface of the asteroid, much like a comet would have.

I'm more of a fan of the WATER VAPOR GEYSER ERUPTION idea, so until they prove it's the other method, I'm going to mentally imagine Ceres exploding geysers into the asteroid belt.


3. Root of All Mammalian Carnivores Discovered 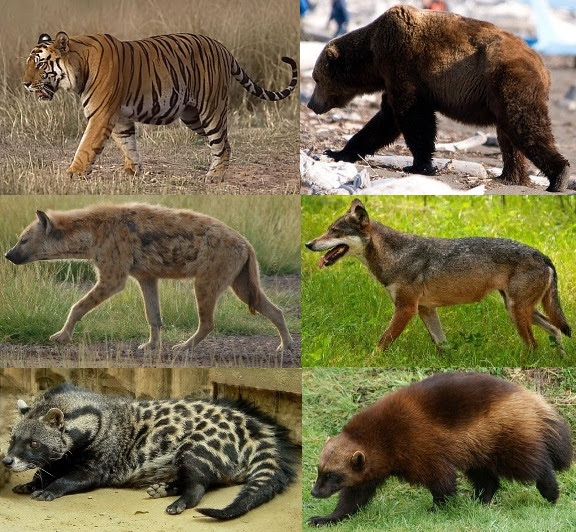 Tons of new fossil material from 55 million years ago has been discovered in Belgium. Among it includes over 250 bones of Dormaalocyon latouri, a newly discovered predecessor to modern mammalian carnivores.

Dogs, cats, bears, weasels...you name it, if it's eating meat, running around on land, and has fur, it comes from one single lineage of sharp-toothed predators of which we know a surprisingly little amount. With this new discovery, the doors to early mammalian carnivore evolution have been smashed open.

In life, Dormaalocyon latouri was maaaybe 2 pounds in weight, so it wasn't exactly the world's biggest predatory mammal. But at that time, practically all mammals were puny, so it would've actually been a formidable hunter to a lot of the fauna. Also, it was arboreal, meaning that it spent a lot of time in the trees. Envision a cat crossed with a squirrel, and you might have a reasonable idea what this thing looked like.

It's just fantastic that we have something near the root of the carnivore family tree. And to make it even better, it's from one of my favorite time periods: the Paleocene-Eocene Thermal Maximum. This is a very tiny window of time, and has equally tiny animals within it. It's the same time period that I worked on out in Wyoming several summers ago, while on my fossil expeditions. A lot of modern mammal lineages originated in and around this time period, so it's awesome to find the beginning of another one!


4. We've Got Black Holes All Wrong

Stephen Hawking has made a pretty big claim that's getting a lot of media coverage: black holes don't necessarily suck things up and keep them forever.

This goes against the very basic understanding of black holes. They're supposed to be terrifying places from which nothing can escape. So what gives?

Essentially, what Hawking proposes, is that there is no event horizon for black holes. Classically, an event horizon is thought of as the point of no return. The place where nothing, not even light, can escape the black hole. And also classically, you shouldn't be able to notice if you cross this horizon.

Hawking instead proposes that there is an "apparent" horizon. Things are held, suspended, within this horizon, but could escape if the horizon breaks down. Of course, he points out that anything past the horizon would be so badly crunched and scrambled that it wouldn't at all resemble what it once had been if it does escape. But the point stands: if things could escape, then there is no "point of no return", and therefore, no event horizon.

An alternative to the classical event horizon has been bouncing around for a while, and that is know as the Firewall. At the edges of the black hole, there is such a concentration of energy that anything that crosses the line would be burnt to a crisp.

I don't really have anywhere else to go with this news story summary, because right now, it's super unclear which idea has more merit. I guess the take-home message is that black holes are weird, and we need a few more geniuses to put their minds towards thinking about them.
Posted by Katie Slivensky at 2:15 PM No comments:

It's been a busy month of cracking down on my Work In Progress. While there haven't been a ton of pages added to the total manuscript length, I've sorted through many of the over-arching issues that have been holding me back, and for that, I'm pretty dang proud.

DW has the most pieces involved of anything I've ever attempted to write before. It's layered with mysteries, and keeping straight who knows what when has seriously stressed me out. So I decided enough was enough, and a couple weeks back I went to town on several in-depth outlines. I did one for every major character/character group. The story is told in first person, but there's a lot going on under the surface to keep track of, so I have to know who's doing what (even if my main character doesn't).

On top of outlining the entire novel over ten different times in different ways, I did character maps, 3 Act breakdowns, and a ton of scribblings on "surprises" and "key scenes". And in the past week, this has finally allowed me to get back into writing this story.

For those curious, it's another Middle Grade speculative-fiction-esque adventure, like all my stories tend to be. But this one is by far the most challenging, complicated tale I've ever committed to telling.

I'm hoping that will translate it to being the best tale I've ever committed to telling, but I suppose we'll just have to wait and see about that.

For now, enjoy the current theme song for DW, and have fun speculating what in the world I could be writing about!

Posted by Katie Slivensky at 2:16 PM No comments: