Getting Inspired at the Kennedy Space Center 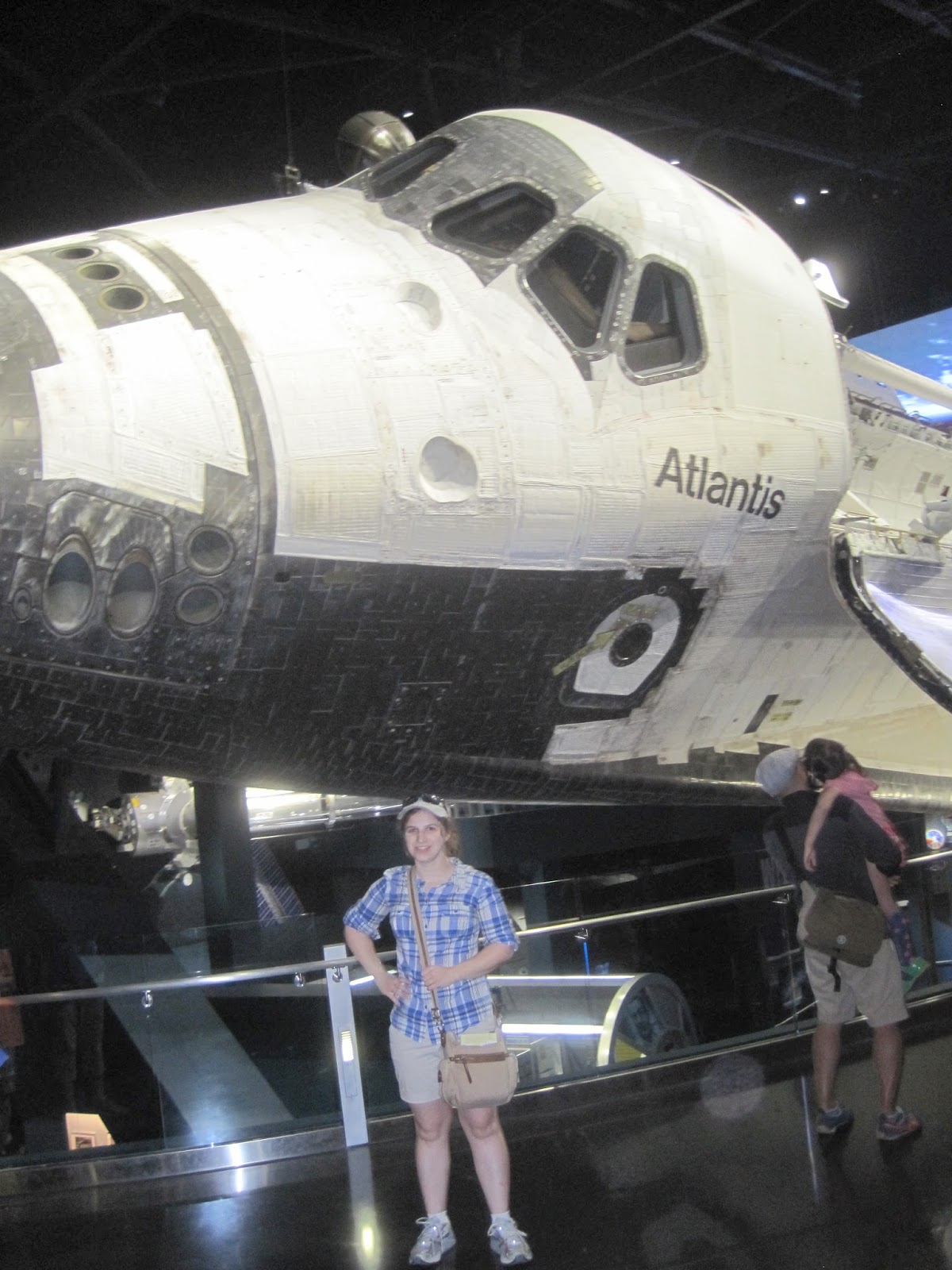 Last week, I got to visit the Kennedy Space Center at Cape Canaveral for the first time. It was amazing, inspiring, and the perfect day trip to take while visiting my parents in Florida.

For those not in the know, the novel that landed me my agent is a realistic space adventure that takes place in the not-too-distant future. The KSC was the perfect place to go to gain a better understanding of what a real space center layout might be like, what rockets and shuttles look like up-close, and what kind of equipment astronauts really use while up in space. I took loads of pictures, some of which you'll see in this blog post, but the majority of which you will not. (Trust me, you don't want to see them all. There are a lot.) 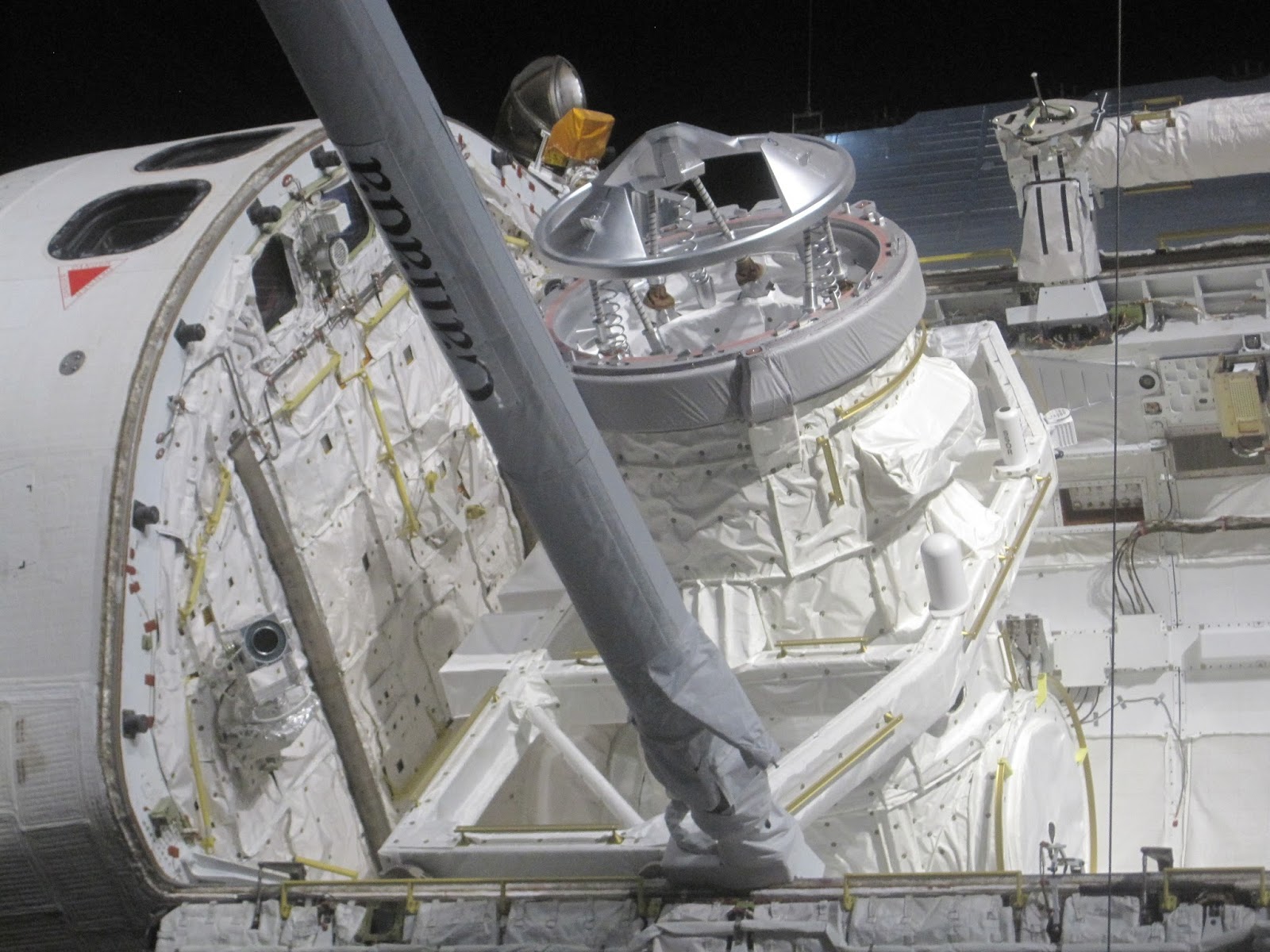 Obviously I've done loads of research on my own before this trip, but there's something about seeing an actual space shuttle in person that no amount of youtube videos or NASA photos can prepare you for. It's just awe-inspiring. I teared up when I first saw Atlantis. The entire time I walked around it, I think my mouth continuously gaped--not just at its size, but at what it represented. It's one of the most beautiful things I've ever had the luck to be near. 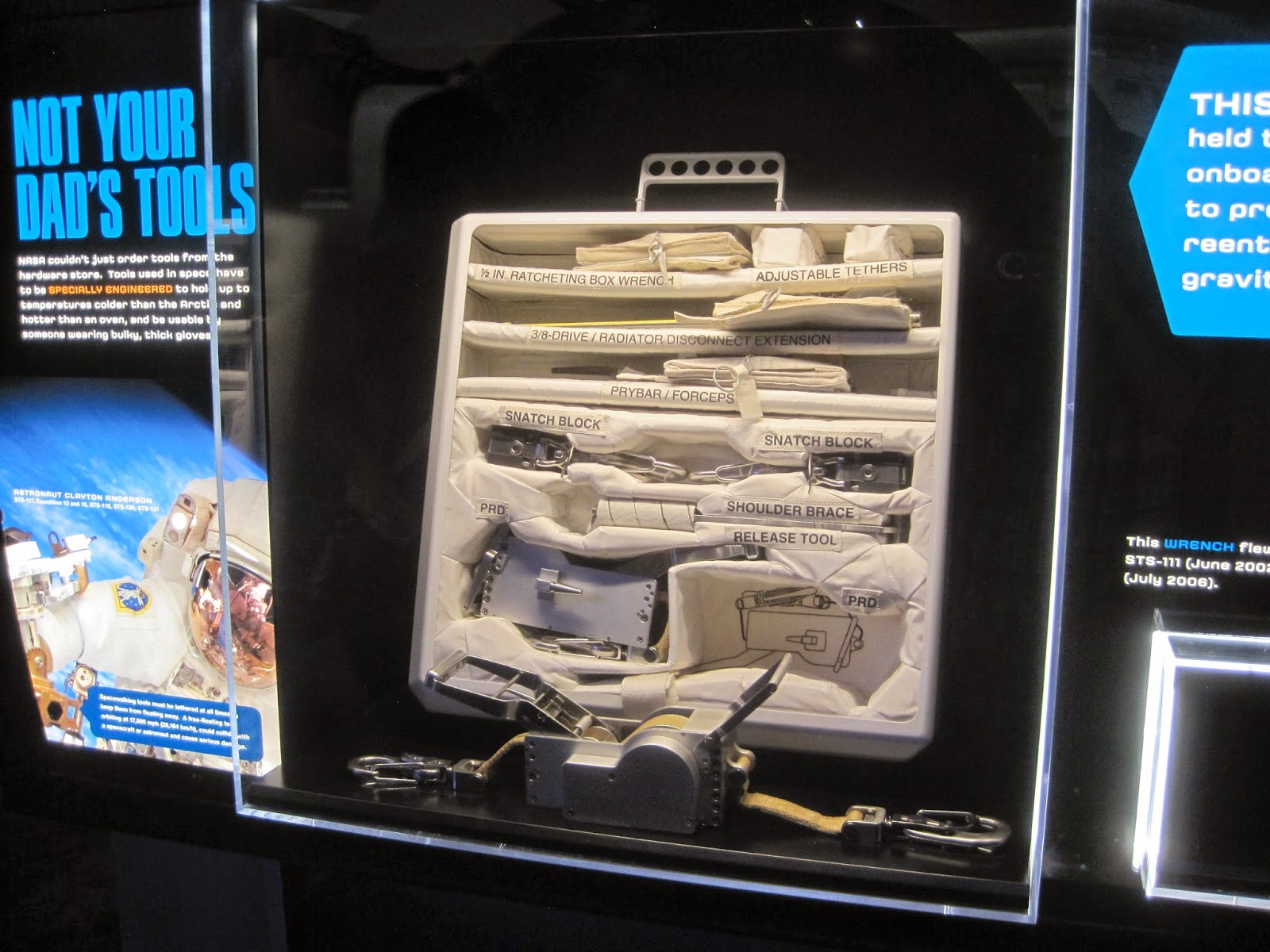 A lot of authors go on research trips to better understand their character's worlds. Unfortunately, when a good chunk of your novel takes place off-planet, that's kind of impossible for me. That's why this trip was so incredibly valuable. From shuttle airlocks to astronaut tool kits, I now have reference points for so much! It's unbelievably awesome, and it's going to flesh out my novel that much more. 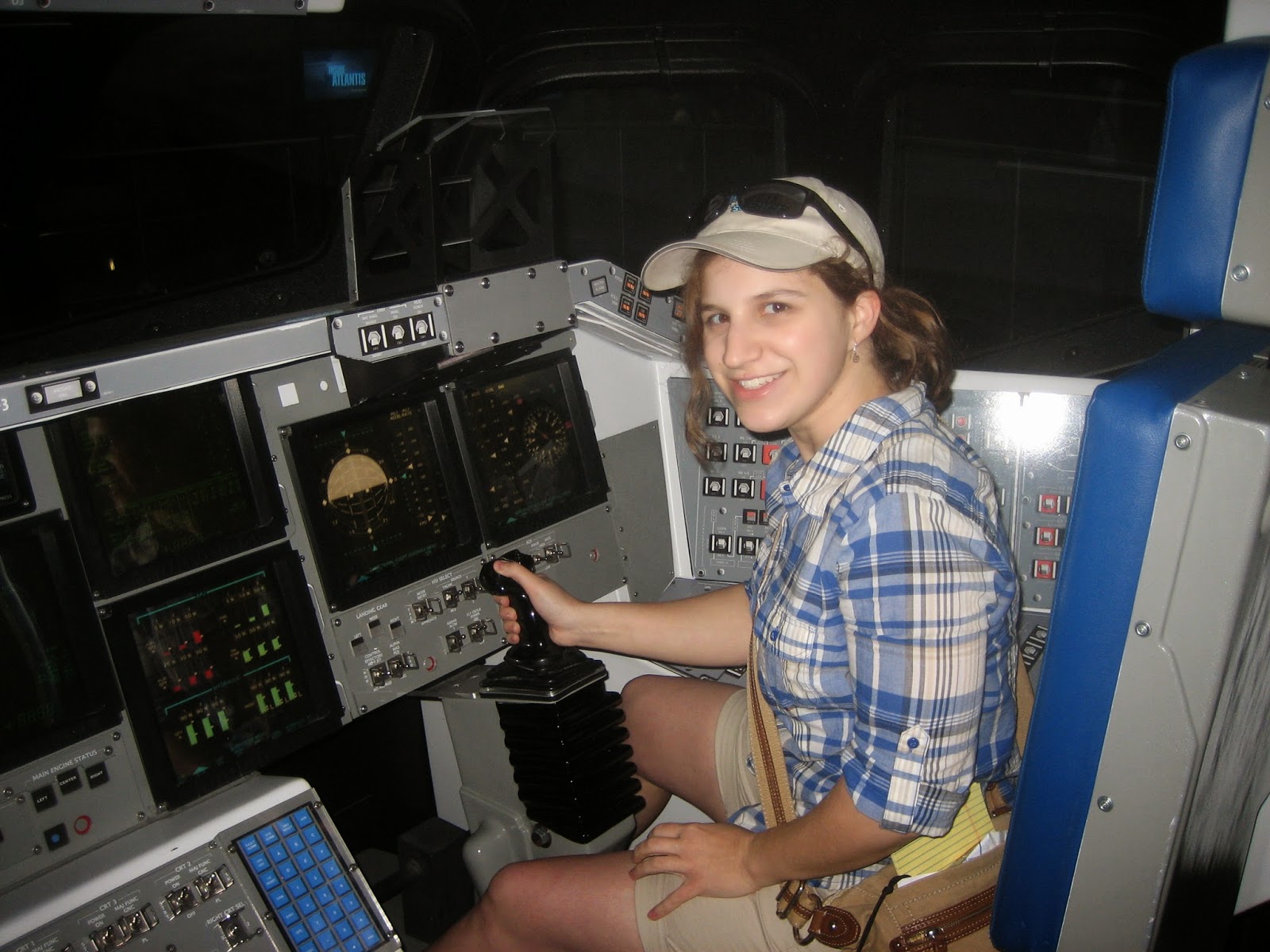 On top of that just seeing cool stuff, I got to ride the "Launch Experience" simulator, which takes you through what it's really like to blast off. It's not just a gimmick, either. It teaches its riders first about each stage of the launch, and what things will feel like at every point along the way prior to actually participating in the simulation. Perfect! I made mental notes of every tilt, shake, and ear-crushing roar I experienced. I can't wait to incorporate them.

In addition, I got to sit in replicas of shuttle cockpits, mime out the movements of a real spacewalk, and went on a behind-the-scenes tour to see the entire base. The scale of operations was mindblowing, and has given me so much fodder for the layout of my novel's primary setting.

The only thing I didn't get to see was a rocket launch. One had been scheduled for the day we were visiting, but had to be delayed due to technical difficulties. We did get to see the rocket at the launch platform, though.

Regardless of the lack of launch, this research trip was oodles of fun and so, so informative. I spent the entire 3 hour plane ride back home scribbling notes and ideas of what to tweak in my novel to improve the realism, up the stakes, and make the journey my characters take even more exciting than what it already is.


If you've been bouncing around the idea of doing some in-person research for your novel, I can't recommend it enough. And if you've ever thought about visiting the Kennedy Space Center just for fun, do it! My dad and I had a wonderful day together and learned so much. Can't wait to visit again someday in the future!


Posted by Katie Slivensky at 6:22 PM No comments:

Let me just repeat that.

NASA's proposed 2015 budget isn't making many people smile, that's for sure. With cuts to planetary science (let's stop studying climate change, shall we?) and reallocation of funds from missions like Opportunity to cover the costs of missions like Curiosity (while we're at it, let's sacrifice one rover for the sake of the other!), there isn't lot of good news out there.

But to me, the worst news of all is the severe cut in education funds. It's taking a 25% hit. Reducing education by a quarter. Are you kidding me?


NASA's budget video shows a group of curious kids learning how to play with rockets. Look how cute they are! So inspiring! Now let's take away one out of four of those kids. No space education for you! Reducing the number of people who understand space and technology is surely the best way to move our country forward!

Now, that's obviously an oversimplification of the problem, but the fact remains that someone thought it was a good idea to have NASA cut back on teaching people about what they do. That means this burden falls on us science education professionals in non-profit, non-government institutions. We do our best. We really do. But the further you go from separating the science and the scientists from the public, the bigger the gap is going to be in public understanding.

This isn't to say that us non-profit science institution folks don't know what we're talking about. It's our job to know, and we generally rock at it. But the level of impact changes when it comes from us, as does the level of connectedness.

We just don't put real importance on it.

This problem is why I do what I do. It's why I'm a science communicator--to help every day people understand the field of science. But us science educators can't shoulder this burden alone. We're under enough pressure as it is. I've been to schools where I've been told I am their science lesson for the year. A one hour assembly, and that's all the science they're going to get, so I better make it count. No joke.

Cutting education should never, ever be the answer.

The one part of this budget plan which doesn't make me cringe is that they're allocating some money to look into a mission to Europa, Jupiter's icy moon. It's long been speculated that under its icy crust, down in its giant oceans, our best bet at finding alien life may lurk. Trying not to be too giddy that this kind of mission might actually happen in my lifetime.

This budget hasn't been approved yet, so more changes may come. We can only hope NASA gets the funding they ask for at the very least, and that more cuts don't need to be made. NASA's only asking for less than half a percent of the entire 2015 budget. Less than half a percent to take our nation into the future. Imagine what we could do with a full 1 percent.

Actually don't. Because you'll just get disappointed that it'll never happen.
Posted by Katie Slivensky at 8:36 AM No comments: