6 Steps to Creating a New Novel

I've just wrapped up revisions on one manuscript, and I'm ready to start work on something new.

I have 9 completed drafts of different middle grade novels on my hard drive, most written in the past 5 years, so I'm no stranger to diving into new ideas. With that in mind, I thought it would be cool to share a little bit about my writing process! With help from my muse, Galileo, of course.

I never have a shortage of stories running around my head. The trouble is choosing one. An approach that has worked for me is not to pick something that I'm personally psyched for, but to find something I think my readers would be psyched for (which in turn, will get me psyched up to write it).

I'm lucky in that I work with my target audience, so I have an endless supply of "What if ______???" questions thrown at me daily. The ones that come up on repeat and sound like they'd be in my wheelhouse are the ones I file away as story ideas.

I also get ideas from imagining what 11 year-old me would've been super interested in. What were the themes and common threads I was stuck on as a kid?

Finally, I like to challenge myself. If an idea sounds simple to write about, it's not good enough. I have to be petrified of the thing. The more scared I am, the cooler the final outcome will likely be. Something big. Something complex. Something outside my comfort zone. Something that will force me to do intense research. Something that will make me want to cry over how many intersecting plot threads there are. Once I've found something suitably terrifying, then I know I've probably struck upon the right story.

For my new manuscript, this was difficult. None of my squirreled away story ideas fit the bill. Each was cool...but not cool enough.

So I took two of them and combined them into one--one that kids never fail to ask me about during my science lessons. Now I am appropriately shaking in my boots at the idea of merging two ideas successfully into one plotline. Now I'm challenged to answer an EPIC SCIENCE QUESTION. And now, fingers crossed, that will hopefully translate into an awesome final manuscript down the line.

My new manuscript is following that trend nicely. I kickstarted it with everything I knew had to go into the first major plot point. Now I'm floundering trying to sort out where things go next.

And that's okay. I've learned that this is all part of my process.

It's this part where I start to find my characters, rather than find the plot. I spend time with them, writing scenario after scenario (all in chronological order, because I can't skip) and learning who they are. Once I know who they are, I get a better sense of what I can throw at them to mess with them, and plot starts to reveal itself. So for a short duration of time (anywhere between 15-80 pages of writing), I am a pantser. Those who know me might be surprised by this, but it's true.


Once I've messed around for a few dozen pages, I stop. I'm a plotter at heart, so I simply can't carry on without setting out a specific, thorough outline.

All writing comes to a halt. I go back to the drawing board, usually feeling overwhelmed and like I'm pretty much the worst author on the planet. But this is part of my process, too, and I've come to accept it.

Here's where things get fun. Now it's time to plan out the entire novel, in detail, from start to finish. Every author has different ways of doing this, but mine is to create outlines for each character (major and minor), using this timeline: 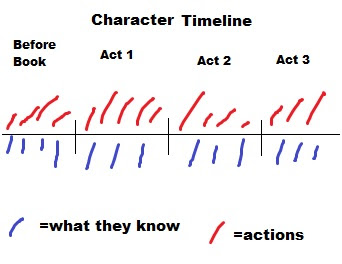 The "Before Book" section is critical. I've actually spent a full week trying to figure out why I don't have a sense of my new main character yet, and just realized this morning as I sat down to type up this blog post that I haven't come up with any of her "Before Book" life.

No wonder I don't know her! She isn't born on page 1 of my manuscript--I need to know where she's coming from in order to plan out where she'll be going! It's a rookie mistake, but I was so focused on trying to merge two story ideas into one, I neglected to think through her backstory. Now that I'm aware of this, I feel instantaneously better. I will find her backstory, and then I will find her character arc.

Again, though, this outline is not just for the main character. All my characters have stories. So what I do after finishing the character outlines, is to overlap them all into an über outline. Then I can keep track of who knows what when, and where they all intersect.


Going off the outlines, I now write an entire draft. This part takes me typically between 4-10 months, depending on what else is going on in my life.

Not much to say here other than...this part is a lot of slog-work. Not my favorite part. But it has to get done.


Once a draft is done, it's time to dive into revisions! This is my favorite part.

One my main goals in starting a second draft is to find the heart of the story, and bring that forward. Part of this is figuring out how each character grows and changes, so I make a list of my characters and make myself answer these four questions about each of them:
Through the process, I usually strike upon what the shared theme is--the heart.

*IMPORTANT: Through the years, I've also learned that what I think is the heart of my novel at this point in the process is not set in stone. In fact, with my last novel, it wasn't until I was done with my entire third draft that I really realized what the heart was (which of course, meant another revision--yay!).


Step 6: Rewrites and beyond.

Once I have a solid second draft, I give it to my critique group for a full review of the manuscript (they've seen it in smaller sections for months in advance--their input begins way back on day 1 of this process!). With their notes, I begin to tackle rewrites. It usually takes me 4-5 drafts to get the manuscript to the point where I wouldn't be ashamed to show it to industry professionals.

So in conclusion, it's often anywhere from 1-3 years between choosing an idea and having an acceptable draft. And now that I'm moving into actual publication, I can add to that timeline how long it will take to go through revisions with my agent and editor, plus copy edits and all the finalization work the publisher will do before the book hits shelves.

Basically, it takes a long time to make a book. Whew.

Why do I do it? As with many authors, the answer isn't just because I want to...but rather that I have to. It's a compulsion. If I'm not actively working on a writing project, my subconscious suffers for it. I'm antsy. Stressed. Disoriented.

Even though I'm wary of my new project (who are these characters? they aren't MY characters! can I trust them? I miss my old characters...), I will feel better once I've properly sunk my teeth into it. I live in fiction, and I'm not ashamed of that. 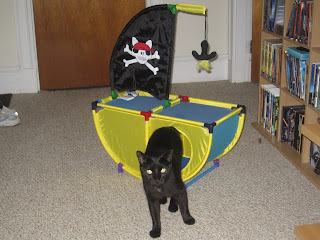 Posted by Katie Slivensky at 12:04 PM No comments: