We Have Lift Off! (My Journey to my Debut Book Deal)

Writing is a lot like a mission to outer space.

You have this idea--this amazing idea!--but it's never going to launch if you don't put in the work to make it happen. So you buckle down. You design, plan, craft, and redesign all over again. You think you almost have it--but then one part fails, and you're back to the drawing board.

You think about giving up. But for some reason...you just can't. So you grit your teeth and keep going.

And then finally, after years of sweat and tears, you have a completed project, ready for lift off! Yes! You did it! It's beautiful!

But having a spacecraft ready to go isn't enough on its own. You can't just launch on the day you finish building. You need to wait until the object you're aiming for is in position. Sometimes that means waiting for months, sometimes years. And when the right day finally comes...when you're so nervous you could burst...when you keep asking yourself, will this work, or will it explode? ...well, if there's bad weather, no matter how ready you are and how badly you just want to see what happens, the mission is put on hold.

Sorry. No fault of yours. That's just the way things go.

"Be patient," people will say. "Maybe today wasn't your day, but your mission is a great one, and some day it will lift off!"

But on the next try, there's a storm. The next one, a piece of launch equipment catches and you have to abort. The next, someone sneezed at the button, and you missed your window.

Maybe your mission was never meant to launch.

Maybe you should call it a day. Call it a learning experience. Move on.

And then...just when you're about to pack it in...it happens.

Your mission...it's GO. You have lift off!

I'm thrilled to say that after years of hard work--not just from myself, but from my critique partners and my agent, too--my debut novel, DESTINED FOR MARS, has lifted off.

It's heading out into the amazing world of Harper Children's, for publication in Summer 2017. It's on its way! Landing at bookstores near you in just a couple quick years! And I am still in complete and utter shock.

DESTINED FOR MARS (possibly getting renamed, by the way), is a story about 13-year-old Miranda, a robotics whiz who is chosen to represent the United States in a decade-long Mars training mission. Right from the start things begin to go terribly wrong, however, and soon it's clear that Miranda is fighting not only for her future—but for her life, and that of many other people's as well.

This book was first conceived of in 2012. At that time, I was querying agents with a manuscript that I'd first drafted in 2009, and writing a shiny new manuscript that my crit group loved (DW, for those in the know). I thought they were going to murder me when I told them I was setting aside my Work-In-Progress in order to write this space book that I'd literally just invented in my head days earlier. But I couldn't help myself. This story had to get out of my head and into a Word document.

I eventually fell so much in love with it that I not only set aside DW, but also shelved the manuscript I had been querying. I realized if I was to debut as an author, I wanted my debut to be my brand new space idea. Besides, I'd gotten two years' worth of rejections from agents on my first polished manuscript, and had to swallow my pride and concede that story just wasn't going to get me anywhere. My hopes now were with a young engineer named Miranda, and her trusty robot, Ruby.

In fall of 2013, DESTINED FOR MARS was in its third draft, and ready to show off. I dove back into querying. I got a partial request right off the bat. Then another agent asked for a full. The response was so drastically different than my previous querying experience, that I scarcely believed any of it was happening.

By December, I had three separate agent offers. And before Christmas, I'd signed with Joan. She just got what MARS was about. It was a perfect match.

For those of you doing the mental math, however, you may have noticed that I signed with Joan over a year and a half ago. So despite the (honestly, intimidating!) immediate onslaught of agent interest in MARS, I can't say that's how my experience on submission with editors went.

Once Joan and I revised and went on sub for the first time, I braced myself for the inevitable rejections. I was used to them, thanks to my earlier attempts at querying agents. Rejections are always rough, but as it turned out, the editor rejections didn't hurt me as much as they confused me. They were often contradictory to one another. I had trouble figuring out what to do with them.

Eventually, Joan and I pulled MARS off submission for a while and did a revision, based on what few common threads we could pick out from the rejections. Among the changes, I deleted a character and added in a new one, hoping things would ring more true. But when we went back out the door with it, the rejections just confused me even more, because on the whole, editors liked it. I had an inbox filling up with lovely notes, but no offers. WHAT DID THEY WANT?

Joan insisted that it was just a matter of time. That we'd find the perfect home for Miranda and Ruby. That maybe one of the editors who hadn't gotten to it yet would be the right match.

I, however, had moved on. Just like with querying, I'd accepted that my first foray into the Bigger Publishing World just wasn't going to go anywhere, and it was time to try something else. I threw myself into a different project (DW, the WIP from 2012 that my crit group had loved so much). I figured my first manuscript taught me how to be a professional writer, MARS was the manuscript that got me an agent, and that my newest manuscript would be what finally landed me a book deal.

And I was so close to having the new manuscript submission-ready. Potentially just weeks away!

Then I came down with pneumonia.

On July 9th, 2015, I sat in the ER, fever spiking towards 104, wondering what in the world had hit me. I spent the next 7 days with fevers over 103, coughing so hard I eventually fractured a rib.

I was less than a month out from turning 30. I claimed 30 was no big deal, but I'd always had the secret ambition to have a book deal by 30. Having lost hope of that, I'd at least hoped to have my newest manuscript submission-ready by 30.

But it seemed it wasn't meant to be. I couldn't get out of bed, much less type. It took two weeks to recover enough to shuffle down my hall, crack open my laptop, and look at my manuscript with whatever energy I could muster. I was at the lowest of lows. My body had failed me, and my goals were just out of my reach, taunting me.

...However, I don't think it was lost on the Writing Gods that the first thing I tried to do with myself after pneumonia was work on writing. Because less than a week later, I had a two-book offer from Erica Sussman at Harper Collins.

Joan called me from Barcelona on July 25th. She was on vacation, not using her cell phone, and I'd missed her original calls because I didn't recognize the number. We finally connected around 5pm, she told me the news, and given the amount of medications I was hopped up on, at first I honestly did not believe it was happening.

I called my parents. Told a couple critique partners. And then couldn't say a word to anyone else until things were made public. It was simultaneously the best news of my entire life, and the hardest secret I've ever had to keep.

Once Joan returned to the States, she emailed me the offer details. A couple days later, we officially accepted the offer. And a week later, on my 30th birthday (and Curiosity's 3 year anniversary on Mars!), the deal became public knowledge, and I was finally allowed to tell everyone.

I've only now calmed down enough to write up this story for my blog. I hope it gives hope to anyone who's struggling in their own writing journey. Sometimes obstacles are there for a reason. Sometimes, as cliché as it sounds, it really is darkest before the dawn. And most of the time, being successful in this business just requires a ridiculous amount of patience and resilience.

Stick to it. It will happen if you don't give up. 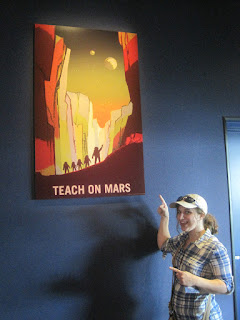 I'm so utterly grateful to everyone who has helped make this dream a reality. My family and friends for their constant encouragement. All members of my crit group, past and present, for building me into the writer I am today. My teachers who saw a science nerd's passion for creative writing, and encouraged me to write more. SCBWI, for the amazing community and services they provide. My agent, Joan Paquette, for being the True Champion of this manuscript. And to my editor, Erica Sussman, who I am so excited to start working with. (Seriously, Erica, you have no idea!)

And buckle up, everyone! Because this ride has just begun!