We've reached the end of the year, and it's time to round-up the best of science from the past 365 days. It hasn't been easy narrowing down my favorite five science stories of 2013, but after a lot of thought, I've settled on the following:


Alright, so this technically happened in 2012, but NASA only confirmed it in 2013, so it counts! I've made it my #5 story, though, since it's semi-cheating.

Thirty-six years ago, Voyager 1 launched from Earth. As of August 25th, 2012, it officially reached interstellar space (...though it is still considered to be in our solar system, as it will be another three centuries before it even begins to touch the Oort Cloud). Congratulations, Voyager!

Scientists were able to detect this major milestone by noticing the change in density of the energy particles surrounding the spacecraft. Basically, Voyager 1 is now surrounded by particles ejected from other stars, and has moved beyond the bubble of particles ejected by our sun. It has entered the "space between the stars".

Which is pretty freaking amazing. Definitely one of the coolest things humankind has ever done. If you do nothing else in your last hours of 2013, take a moment to appreciate that there is a human-made vehicle hurtling beyond the edge of the sun's influence as we speak.

Geology nerd time. Back on Planet Earth, scientists have discovered a volcano that completely blows the old record for "largest volcano" out of the water. (I made a joke! Get it? ...No? Read on...)

Tamu Massif is an underwater volcano off the coast of Japan (get it now?!). It was previously thought to be an area of many smaller volcanoes, but new evidence shows that it's actually just one really, really big one. It's FIFTY times larger than Mauna Loa, which up until this year had been considered Earth's biggest volcano. (Mauna Loa remains Earth's biggest active volcano, however.)

Tamu Massif is about 75% the size of the solar system's biggest volcano, Olympus Mons (on Mars). Lucky for us, it's been dormant for 144 million years, and doesn't look like it'll ever erupt ever again.

What a year in Human Evolution. With DNA studies galore throwing new surprises left and right, including new origins for Native Americans, a new species of human ancestor, and Neanderthal-inherited immunities, and then the whole debacle with the Dmanisi skulls throwing everything we know about speciation 2 million years ago into question...

But I think my favorite thing has been the exploration of the Rising Star Cave in South Africa. This expedition, led by paleoanthropologist Lee Berger, has already become one of the most successful of all time, and is certainly the most successful for the amount of time spent excavating in this cave.

Over 1000 hominin fossils have been recovered in just a matter of weeks. This is unlike anything paleoanthropology has ever seen before. The science of these fossils is yet to be done, but the sheer numbers are mindblowing. Check out this discussion with Lee Berger to hear the amazing story from beginning to end.


Okay, so you've caught me. Picking five stories was impossible. Just like in the #3 slot on this list, the #2 slot is shoehorning in several stories.

2013 saw a huge increase in our understanding of where else water may be in our galaxy. Outside of our solar system, over 1000 exoplanets have been identified, and Hubble has detected water in the atmospheres of five of those so far. This is HUGE. Trying to detect water in the atmosphere of planets out of our own solar system has been a goal for a long time. Just imagine what we'll know about exoplanets by this time next year!

Back in our solar system, Hubble has found water in plumes from Europa, a moon of Jupiter that is thought to have giant oceans under its icy surface. And on Mars, Curiosity has been going strong. From water in the soil, to the discovery of an ancient freshwater lake, Curiosity has proven that there were once places on Mars that were perfect for the existence of life. And, in case anyone has forgotten, determining if Mars could've been suitable for life was the main goal of Curiosity's mission.

Here on Earth, water is so commonplace, you'd never think it'd make the news. But even here water made headlines, when some ridiculously old H2O was found in a Canadian mine. This water dates back 2 BILLION years, and is teaching us all sorts of things about the chemistry of that area from that time.

But even all of this excitement can't top what thrilled me most in science in 2013. Without further ado, I give you the absolute coolest science story of the year...


1. A FREAKING METEOR EXPLODED OVER RUSSIA!

THIS WILL NEVER NOT BE AMAZING.

Seriously, guys. This actually happened. I've done three different blog posts about this event already this year. I will talk about this until the end of time.

Because seriously. THIS HAPPENED.

If you want to read about the science of it, I suggest you check out my original post from February 15th. Or my follow-up post, the day after. Or my post about the origins of this space rock from August. Any of those will do. For now, though, I'd like to wrap up my 2013 blog with this gorgeous picture, supplied by NASA. 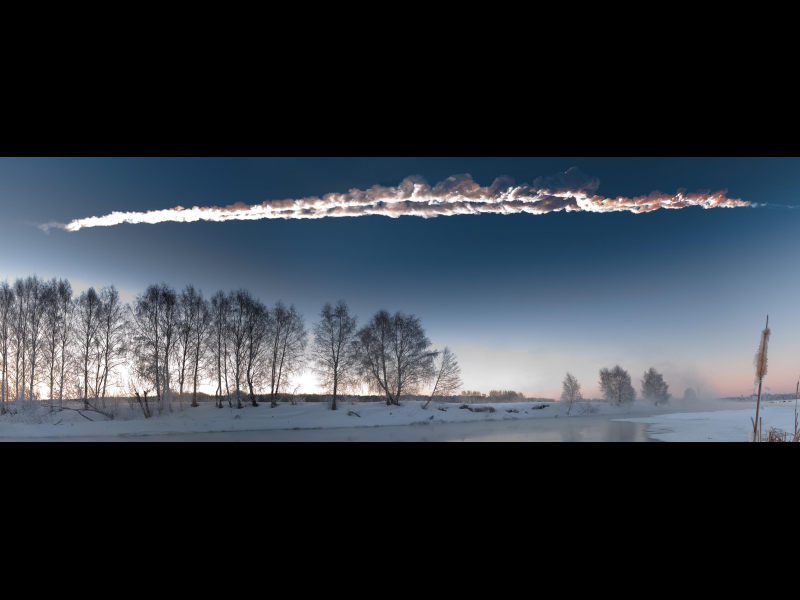 Happy New Year to everyone out there! May 2014 bring us more science excitement, a new batch of amazing discoveries, and at least one neat thing to smile about each day.

Posted by Katie Slivensky at 1:10 PM No comments:

Blogging has been slow the past couple of weeks, because some big stuff has been happening in my writing life. I'm not going to be coy and dance around this, so here goes...

I am thrilled to announce that I am now officially represented by Ammi-Joan Paquette of the Erin Murphy Literary Agency!

It's happened! I have a literary agent, and I couldn't be more excited about it. Joan is fabulous. I know she's going to do a fantastic job representing me and my manuscript in the big scary world of children's book publishing.

For those that don't know what exactly all this means, you can think of this as the first professional step on the road to becoming published. Nowadays, it is extremely difficult to be a published author if you don't have an agent (unless you self-publish). An agent is the link between authors and publishing houses. Now that I have one, I get to move onto the next phase of my career--submitting to publishers to see if anyone wants to take on my book!

I will likely do a longer post in the future detailing how I "got my agent", because that story really deserves its own post. What I will say now, is that I had three agents read my full manuscript, and got offers from all three of them.

It was simultaneously awesome and terrifying. As you might imagine, choosing amongst them was not easy. But in the end, I went with Joan, because I felt like she was the best fit for where I wanted to take my writing career. She's extremely easy to get along with, she has an incredible success rate in the business, and she is a sci-fi author herself. Plus, she connected with my book in such a positive way, that I knew she would strive to see it succeed. Joan was the full package, and I'm still flabbergasted that she saw enough of something in my writing to offer representation.

I feel so lucky and honored to be joining the EMLA family, and can't wait to get to know everyone associated with them. If anyone is reading this and wants to follow me on twitter, my twitter handle is "@paleopaws". I will follow you back! I'm cool like that, I swear.

So that's my big news! Heading into 2014, I'll be an agented writer, getting ready to tackle editor submissions. Thank you so much to everyone who's supported me during all of this. To my friends, family, and critique partners for believing in me and in this manuscript. You were right. Apparently it was an awesome story. Next step: make it even more awesome.

Okay, 2014. Publishing houses. Editors. Let's do this.
Posted by Katie Slivensky at 3:25 PM No comments: